Genetically Engineered Humans, What Could Go Wrong? | The Ones by Daniel Sweren-Becker 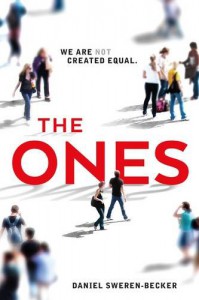 Sometimes you have a really good idea in the shower. Like you are just scrubbing shampoo in your hair, then WHAM, it hits you. Maybe it is an invention that the world just needs to have or a song that has to be written, but whatever it is, it is pure genius. Although it might seem like a great idea while the steam is fogging your brain, when you get out you realize there are many holes in the idea. The shower is a good place to start ideas, but they have to be finished on dry land.

I feel like The Ones is a book that was born and raised in the steam of a too-hot shower. The beginning of the book was great, like that AHA moment you have in the shower. There was a twist in the beginning that had my mind reeling. The beginning of the book was really realistic and I felt as if it could actually happen sometime in the future. I have to applaud Sweren-Becker for tackling such a complex issue. Whether or not you want to think about it, genetic engineering is happening right now. Eventually, humans will have to decide how far we are willing to go, which he deeply explores in his debut novel.

In the beginning, everything was great. The characters were solid. The setting, including the popular opinions and social environments of the time, complemented the conflict well. Even the different perspectives added a personal touch to each narrative.

Unfortunately, the rest of the novel was cloudy, like the steam in a shower that should have been done hours ago.

The characters changed from relatable teenagers into rebels with a cause like in so many other dystopian novels. Instead of standing out from the crowd, the characters made themselves into stereotypical, self-righteous teenagers. They ran headfirst into the "action" before considering consequences, like pretty much every other teenager stuck in a dystopian future. While the action moved along the plot and gave the characters something to do, it caused a rapid decrease in the reality of the situation along with my interest.

They fell into bad situations that I could see were traps from 10 miles away. Frankly, at that point in the novel, the characters kind of deserved what they got. The only character I ended up rooting for was James. His character remained constant throughout the novel, even though Cody changed so much that I started rooting against her.

In contrast to the amazing beginning of the novel, the later twists stopped being surprising and the ending was more frustrating that suspenseful. The potential that started so high in the beginning crash-landed at the end without any way to recover. I believe that the novel would have been five stars if it was so soggy from spending too much time in the shower.

The Ones is not the unique dystopian novel I thought it was going to be. Although the beginning was strong, the rest of the novel crumbled under pressure. If you like the idea of genetically engineered humans, then give it a shot but don't expect anything different from the rest of the genre.