The Fault in Our Stars vs. Turtles All the Way Down | Book Battles 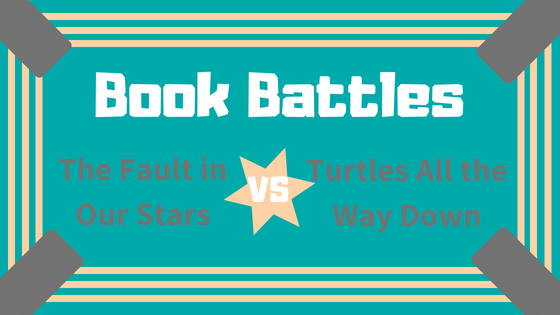 Welcome to Book Battles, a feature here at Crazy for YA where I put two books in the battle ring and have them fight it out to see which one is better. See all of my previous bloody, literary battles.

Today's fight is a vicious fight, two masterpieces from the same creator, a cult classic vs. the new book on the scene, The Fault in Our Stars vs. Turtles All the Way Down by John Green.

In addition to both being written by the same author, TFIOS and TATWD are extremely similar. They both deal with tragedy, death, and philosophical teenagers. Both novels have a female main character who has to deal with these unfavorable circumstances aided by a love interest. Parents play a large role in both stories, unlike his other novels.

Today, I am going to investigate which of John Green's stories is superior.

Click the link to see which book won and the reasons for my judgement!

Plus I would love to hear what you think about both of these books! Which one do you think is better?